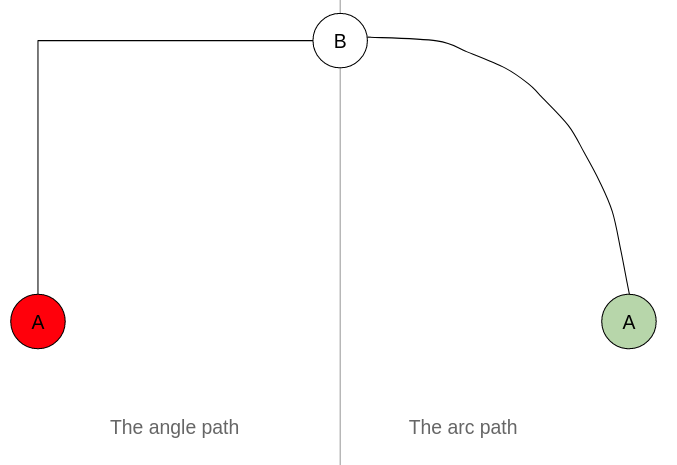 One goal, which path would you take?

Imagine you had a goal – perhaps to lose weight or to learn a skill, or even to build some capacity/capability as a person, team, company or country.

Now imagine you did very little towards getting to ‘B’ until one day when ‘B’ stops being a nice-to-have and , instead, becomes a must-have. I call that day or the event triggering that realisation ‘a sharp turn event’.

So now you’re scrambling, stressing and enduring a massive disruption to everything so you can start heading towards ‘B’ and you needed to be there yesterday.

An example of a sharp turn event is cancer, a heart attack i.e it happens and to reduce the chances of it happening again or as severely – you start to eat better, exercise, cut out smoking and excessive drinking.

Other examples might be being mocked for being overweight or a global pandemic.

Now imagine you are in exactly the same starting point and the goal remains unchanged. But instead of doing very little about getting to ‘B’, every day you did something tangible towards the goal and you kept the goal alive by checking if those things you did got you closer and adjusted as you went.

Sharp turn events are not entirely eradicated on this path, but their negative effects can be significantly reduced. You are already some way to the goal, you are on the path.

An example might losing your livelihood whilst pursuing a goal of saving for a home and choosing to live frugally whilst you were saving – being lean. Of course, it seems calamitous that you have lost your job – but given how you are living as you pursued the goal, you are in a better position to weather the disruption vs someone who lived extravagantly (even if they had the same goal as you!).

Arcs are softer but build habit and resilience.

Some thoughts on arcs and sharp angles…

In closing, I am no expert in this and I’m not selling any ‘improve your life’ crap. I am simply introspecting into events and paths in my life and things I see around me.

The coronavirus pandemic has shown us that many – if not all – countries have been fixated on either the wrong goals or have not acted in an arc way towards the right goals and we find ourselves in a sharp turn event where the world is mostly unprepared for massive unemployment coupled with a lack of digital tech for everything from government to education.

What are your thoughts on this theory? Please disagree with it and lets explore it further.